I went to JavaOne a few months ago. It was a pretty neat experience and I learnt a lot of cool things. One of the things Sun was touting was the JavaFX family of technologies. It allows you to create RIA (Rich Internet Applications) using JavaFX Script, a domain-specific language built on top of Java. The demos were pretty impressive and it looks like Sun's answer to Flash and Silverlight. I went to a few JavaFX sessions and I signed up for the preview SDK, which came out a few weeks ago. Since then, I've been playing around with the language to see what it can do. The language is pretty neat and being dynamic, has some pretty cool features like closures, list comprehension, lazy/incremental evaluation (through binding), and triggers. In addition, it uses a declarative model (although you can still use the traditional model) for describing a GUI. The API provides Swing components, but I believe the intent is to completely move away from that and use only JavaFX GUI components. 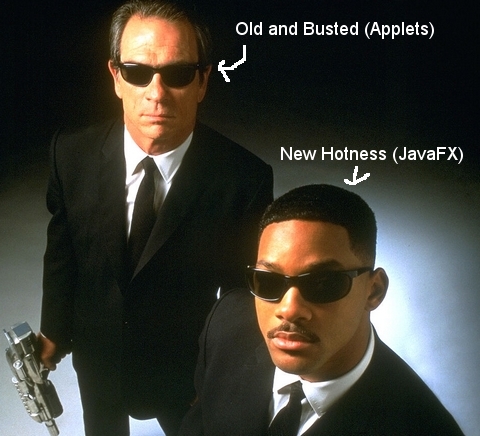 Using a language that is only in preview is pretty interesting. The API is unfinished and the language isn't completely mature, but this is to be expected. That being said, it still looks promising and seems to be a very capable and expressive language. Also, seeing as it is built on top of Java, you have access to all of Java's rich API in addition to the numerous third-party Java libraries and API's that are out there. I've been playing around with it for the last week or so and I was able to write a small calendar widget. It simply shows a month view for the current month, with the current date highlighted. I haven't had much experience with writing GUIs in Java, so it took me a while to figure it all out. I shamelessly stole the colour gradient background from one of the demos in the preview SDK. The only issue I have right now is the load-time of the widget. It seems to take a while when you load it first. I don't know if it has to do with the way I coded it or not. I'm pretty sure I'm not doing it the best way, but I expect to get better once I get more familiar with the language.

Here's a screenshot of the widget running on Firefox 3 on my Ubuntu laptop (the theme is a Leopard theme):

I have more details on the project page.

3 thoughts on “JavaFX: The New Hotness”