Happy Halloween, everyone. Guess what I'm going as this year? A soldier! Yeah, pretty original, don't you think? This time last year, I was on the first day of my four-day pass to Phoenix. One year. Three hundred and sixty-five and a quarter days. The time it takes for our little blue, wet world to travel around the Sun. In a few days, I will be on my way home. Physicists and philosophers have long tried to understand the perception of time. But neither arcane equations nor metaphors have actually been able to fully explain the human perception of time. I have come to understand that over the past year. It is strange when a year can seem both interminable and fleeting at the same time. I remember the day I got here, like it was yesterday. It was a cool December afternoon and we were waiting at Baghdad International Airport for the old unit to pick us up. I guess the date of our departure was so far off in the future, obscured by the clichéed "mists of time" so to speak, that I didn't even think about it. Or, maybe it was because it was so far off, that I didn't want to think about it. Whatever the reason, I did acknowledge our departure was a very long way off. I set myself little "markers" during the year. Chronological mile-markers, if you will. Some of them were totally random, meaningless to others, but of great import to me. For example, on my second day in Iraq, we made our way to the International Zone, to go to FOB Union III where we thought we would be staying. As I grabbed my stuff and made my way to our living quarters, I caught a glimpse of some writing on a dry-erase board. It said, "10 weeks". 10 weeks - a nice, round number. Although it seemed like a long way off then, I remember thinking how it would feel when we were down to 10 weeks. My next "mile-marker" was my leave date, which was in the first week of May. My leave was situated nicely in the middle of my deployment and so it was a sort of halfway point too. The marker after that was for when we were down to a hundred days, because after that, we would be down to double-digits - woohoo. Then I had "83 days", because that's how many days our SSA had left (they had come to Iraq a month before we had) when we were at a hundred-and-something days. My second-to-last marker was for 10 days, because after that, we'd be down to single digits. Now that's a REAL reason to celebrate! And last, but by no certain means, least is our actual day of departure. Suffices to say that it's only a few days away! Now when I look back, the whole year looks like it just sped by. I think a year seems like a year because of the different things we do. Different things that happen. We set up "mile markers" in our head so we can think back to "the totally crazy party back in February where I got totally wasted", or "oh man, Spring Break", or "Oh yeah, that's when I went up to meet my family" and so on and so forth. But over here, there really isn't much to distinguish one day from the other. I did the same thing over and over again, and so there was absolutely nothing to mark the passage of time. I do remember the individual moments when I would wistfully stare at the "Time Tracker" spreadsheet that we had, wishing that time would move faster, but at the same time it does seem like it sped by. The old adage "time flies when you're having fun" doesn't really seem to fit here. I can't really say I "had fun". It wasn't all that bad, but it really wasn't "fun". Oh well. At any rate, I'm just glad that it's almost over.

The past few weeks haven't been all that bad, really. The new unit came in a few weeks ago and we slowly started handing over ownership and responsibility for our various missions, to them. I also started doing something that I should have started a long time ago. They have Latin Dancing on base at many locations. They have one (and by having one, I mean in the most liberal sense of the phrase) at the Division MWR (Morale, Welfare, and Recreation) Center. It's on Thursday nights, and there never has been a huge turnout. I went to this one because it was close to our pad. But the really good one, was the one on Camp Slayer (Saturdays at 2000. 8 pm for you civilian types). It's a bit of drive from where I live, so I never really tried to go over there. But I decided to try it out last month and I didn't regret it at all. The only thing I regretted was not going there earlier. There is a huge turnout - the dance floor is positively crowded. It reminded me of the old "Bash on Ash" (A club that used to be on Mill and Ash in Tempe) days! It also gave me a chance to unwind and do something different. Usually, when I tell my fellow soldiers that I enjoy Latin Dancing, I am met with humorous intrigue, quickly followed by a few lighthearted jabs. As a result, I am not really in the company of a lot of people who really enjoy the activity. So it was pretty neat when I met new people who enjoy dancing as much as I do. Never did I realize that there would be this much interest in this activity in Iraq. In fact, I was expecting a year of no dancing at all. I guess I was wrong. I was mistaken for a Puerto Rican more than once. It usually happens when someone approaches me and rattles off something in Spanish. When I tell them I don't speak Spanish, they are often confused. I guess they don't meet too many Indians who can Salsa or Bachata! I had my last "Latin Nite" last Saturday, and I felt a little sad but then I realized that I'd be doing more than enough dancing when I get back. In fact, Johanna told me that I'd have to dance so much that I wouldn't be able to feel my feet. Making up for lost time, I guess.

Right now, almost all of us are in the Tents. We moved in two weeks ago. I sold all my stuff, and shipped a bunch of stuff home too. It's not too bad in the tents. Since we don't have too much to do now, we basically sleep in, read, or watch movies. I think it's rest that all of us deserve!

That's about it for now. The next time I write, I will most probably be in CONUS (Continental United States). Oh, and here are the pictures I promised:

Amber (SGT Brinton, USMC) and I at Camp Slayer on Latin Nite. She's an excellent dancer; a great follow. Definitely one of the better ladies I've danced with.

A bunch of ammo!

A really touching picture I saw in Stars and Stripes. Insurgents (so-called "freedom fighters") killed the baby girl's father and mother, before shooting her in the head. She's slowly recovering in the hospital keeps crying and moaning all the time. The Air Force Chief Master Sergeant in the picture is the only one who can comfort her.

Waiting for our boxes to get inspected by Customs personnel.

Dora. One of the people I met while dancing at Camp Slayer.

Our Halloween decoration at the Motor Pool. 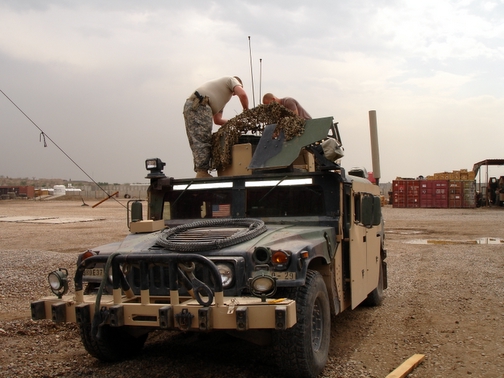 Camouflage Cover for our Humvee 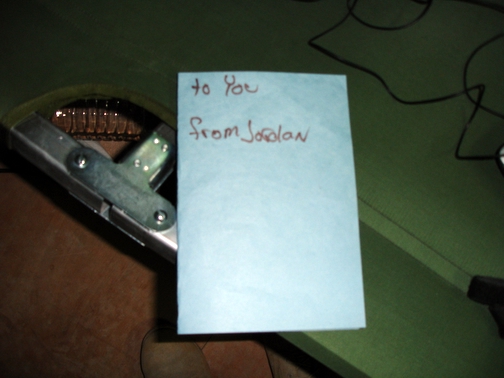 We get a lot of cards from kids. SGT Laning gets some strange ones... 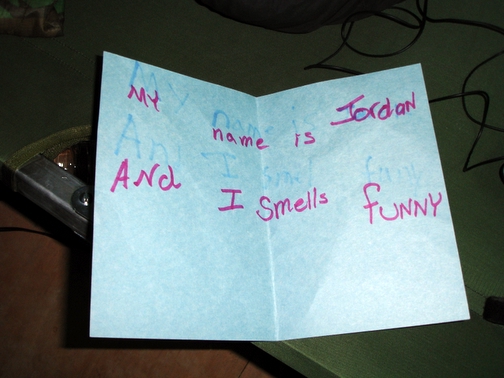 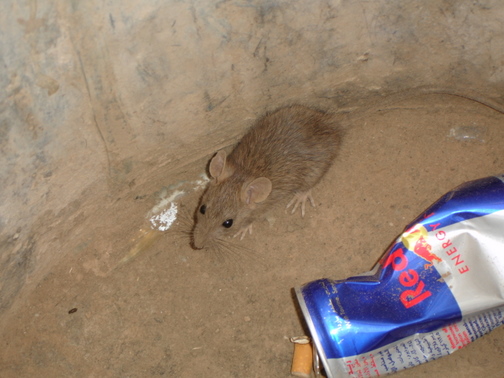 We had a rodent problem in the Motorpool. They were getting fat off our food and off creamer. We finally caught one of them.

SGT Dahlseid and SPC Palmer installing the camouflage cover on the humvee. 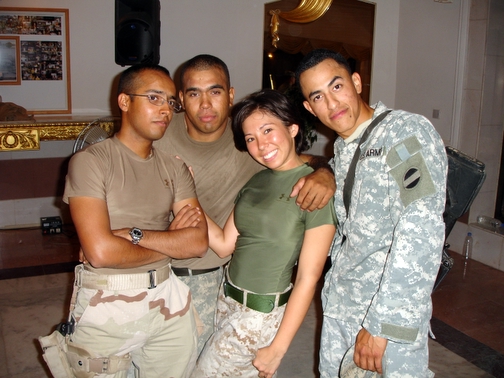 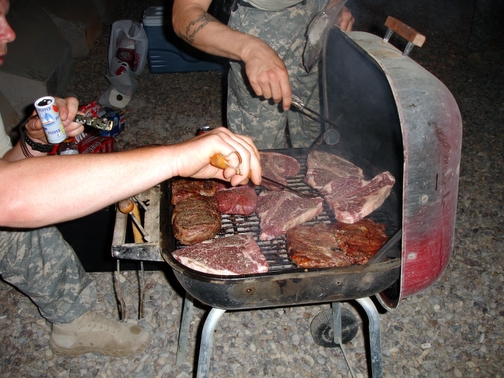 We look forward to Seak Night (Tuesdays) with great anticipation. 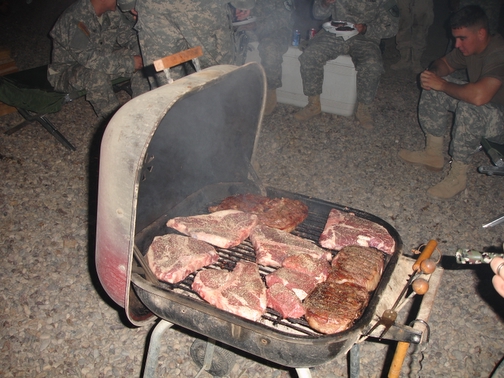 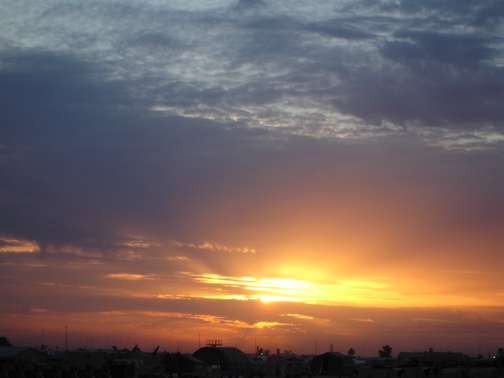 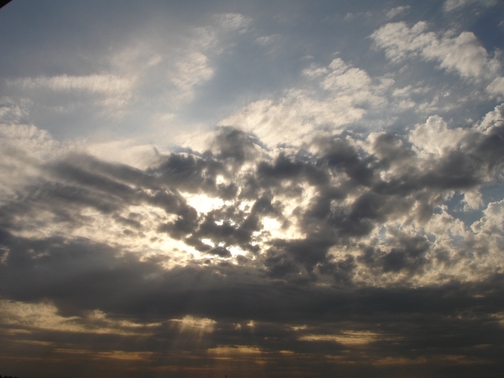 As you can tell, I really like taking pictures of sunsets. 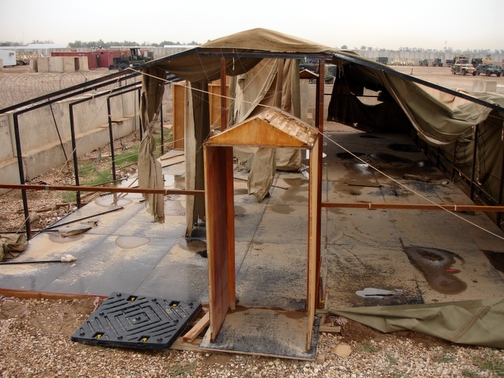 We have thunderstorms here, just like the ones in Arizona. This tent didn't fare too well after a particularly strong one.

SPC Ortiz: "The Plane! The Plane!"